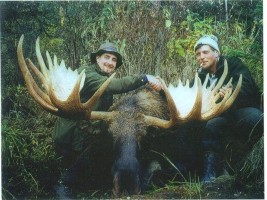 2000 square miles in Northern British Columbia.  All hunts will start at Fort Grahame, BC.  Regular air service is offered to Ft. Grahame, Monday - Friday.  Ten (10) days of hunting.  Bulls average between 45"-55" with a few over the 60" mark.  In addition to moose you can hunt elk, caribou, Billy Goat, Whitetail, and Mule Deer.  $8500 plus license.  If successful on first animal of choice you may choose to hunt a second animal above for an addtional $2500, if successful.  All fall hunts include black bear and wolf and no extra charge.

Shiras Moose.  We operate out of areas 3, 4, and 5 for moose in Wyoming.  All tags are through a lottery system starting January 1st of each year.  Applications must be in by February 28th.  If successful you will be notified around the first week of May.  Camps will consist of rustic tents to cabins depending on the unit you will be hunting.  Seven (7) days of hunting.  Shiras moose are a smaller species but mature bulls will average around 40" plus.  $6200 plus licenses.

Operating out of the northern peninsula of Newfoundland these remote camps are fly in only.  You can choose between a 7 day or 10 day hunt.  With most populations of moose found in the northern peninsula, you have a good chance at a bull of 50" plus.  Rustic camp does have hot showers, linens, full time cook, guides and satellite phones.  7 day hunt, $4300.  10 day hunt, $5100.  All hunt prices include licenses.  Ask about moose/caribou combination hunts available.

Chase moose in southwest Alberta during the rut with archery gear in late September.  $7225 all licenses, tags and taxes included.

Rifle hunts available throughout October for $6275 all licenses, tags and taxes included.  All Alberta hunts include wolf and coyote, free of charge.